Also minor clarification to those examples, I don't mind vore or inflation in general, it just annoys me when people make Undertale vore. Assuming I'd actually use tag blacklisting (I'm not a baby, therefore I don't) I don't want to filter out all vore or all inflation, just what is related to that particular type of fanart.

My system is not limited to ratings, it allows all manner of combinations of what you specifically don't want to see

If you implement both, you can't have a table, you'll probably have something like a single line text box and a bunch of option buttons next to it. Add 30 of those and you just added a couple hundred elements to the page.

My method requires ONE text box and ONE save button.

And I have been very polite to you, the downvote was uncalled for. But I'll return it in kind and you're welcome.

Blocking combinations of tags, rather than individual ones.

By that I mean It would work exactly as expected and block only the sexual cub stuff.

This site needs an edit button, or at least a delete button.

Blocking combinations of tags, rather than individual ones.

The other user who suggested being able to blacklist multiple tags (all that match per image) was imo a better idea.

I further added to that that the blacklist should be a text box. One tag per line filters out the entire tag completely. Two or more tags per line filter out only images with ALL of those tags.

What you wrote there would be blacklisted as:

Making a grid with tags is probably cumbersome to implement in terms of design.

I completely support this.

Never mind my TV disassembling shenanigans, people seem to have been using hdmi extenders and capture cards with patched firmware since forever to bypass HDCP...

Yes. That's a problem. I noticed that too, when I signed up for an account, it cleared all the votes I already cast.

It's a different platform (UserEcho) so that's why accounts are separate.

What's worse, when I registered here, I am very sure I used the password field properly, but I somehow ended up with my PASSWORD as my user name and had to go reset all my stuff because of it, my account history probably shows this. This site clearly needs some more testing and debugging.

You'd think after seeing the movie and audio studios fail so hard at protecting their stuff, and we're talking about people who probably put many millions of dollars, maybe billions into researching this, you people would have learned a lesson. Apparently you didn't. Looks like the public has to teach you some more. And I mean even in our fandom, paywalling art behind Patreon sure worked out well and in no way backfired spectacularly, did it? :3

Your best bet would be to get on your knees and beg your fans to please be kind, mindful of your hard effort and support you and not rip fresh paid content at least until you can make some profit off it. That attitude ain't gonna cut it, bro.

I think people even stopped protecting audio at this point, the ways to rip it are so numerous, one can't even begin to list them all. Basically, the "analog hole problem". If you get signal, you have the data.

If no HDCP is used, worst case scenario is probably using an audio loopback cable and connect your line out (green) to line in (blue) if for whatever reason recording off the system sound output directly won't work right away. My laptop for example even comes with a line-in jack, but I never had to do audio loopback to record system sound. Doing audio loopback with the mic input is not a good idea I think. I don't think it can damage the audio card, but it will probably sound distorted. They have different line levels.

If it has HDCP, one can use a modified device to intercept the signal, which is probably as simple as opening your HDMI TV, solder cables to the speaker terminals, and use that as line-in input. I think max allowed is 2V for line-in, so some testing with a voltmeter and possibly mounting some resistors on the cable may be required, but it's not rocket science, it's basically high school physics class science project tier stuff, and anybody could do it. I just thought it here off the bat, and I'm not even smart, I'm just nerdy, there's probably a more easy way to do it, such as grabbing it before it gets to the amplifier circuit in the TV and then you have "pure" line-in signal, but I'm not that smart.

Or use a good microphone in a room that doesn't echo (I saw a youtube user named Thunderf00t use sort of a blanket/pillow fort in a hotel room as a makeshift soundproofed room) and play around with the levels until you get good clarity. That doesn't require tampering with any electronics.

Also, using DRM will probably piss off one's fans as much as watermarks across the image piss off art lovers :) 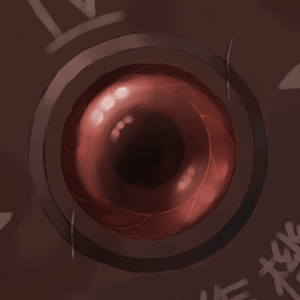