HTML as a form of multimedia

If someone creates an interactive video or a game for the furry community, surely they should be able to post it here on FN as well, rather than just have a link to a separate website that hosts the content! Sure you can use Flash, but come on - it's 2016, and Flash sucks dragon d compared to HTML5 and JavaScript. It's outdated, propietary, feels glued on top and has become useless as HTML5 was introduced.

So why not allow the users to post a HTML file as Multimedia, and display the uploaded page in an iframe or even as a page of it's own when you click on it.

Sure, you could potentially upload a thing that redirects you to a bad site on the internet. You could even upload some bad site yourself. You could also break the rules in general and start uploading pictures of dead puppies, make hate posts et cetera. The rules state "No uploads of files containing malicious code" - which applies to HTML artwork as well. Artwork that breaks this rule will be downvoted, reported and removed.

As for everyone concerned about security, this is a different situation from, say, allowing HTML to be displayed in comments. If HTML was allowed in comments, any page you visit could potentially contain scripts written by any user in FN. However, by allowing HTML to be uploaded, you know exactly when you're opening someone else's scripts, and you know where the scripts come from (hint: it's the uploader). So if something funny happens, you know it's probably in the HTML you just opened. As the source of the HTML is accessible to everyone, anyone can check what code they are going to run. In Flash you don't even have that option.

The point I'm getting at here is that when the upload is clearly stated as being HTML, the users expect it to be HTML, expect to something new to happen, and are okay with it. Just like opening a new website, or clicking a link in the description that takes you to a new website.

If you clicked on something that looks like a game: 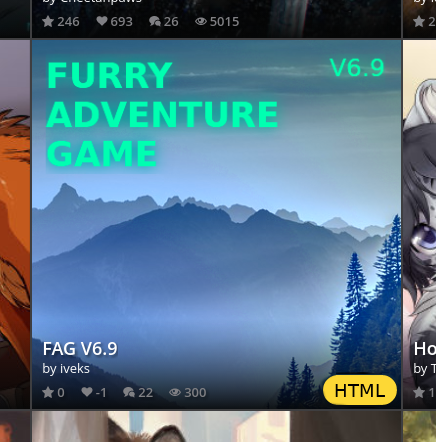 So instead of seeing this as another potential security risk, try to see it as a potential for users to create more dynamic and awesome content to share to the world.

I'm open to discussion, let me know what you think!

I do a kind of web comic-like thing, but I have my own preferred layout that I do in very basic simple HTML. So allowing an HTML upload would be appreciated by me too. Sofurry allows it in their Stories, so I post there. (Images are actually hosted on Tumblr but I reformat them using HTML there too.)

This is an interesting idea, and since multimedia is one of the most used features on the site, it could be worth expanding functionality. I'll check with our development team to see if this would be reasonable.

Thank you! Looking forward to hearing their thoughts on this matter!